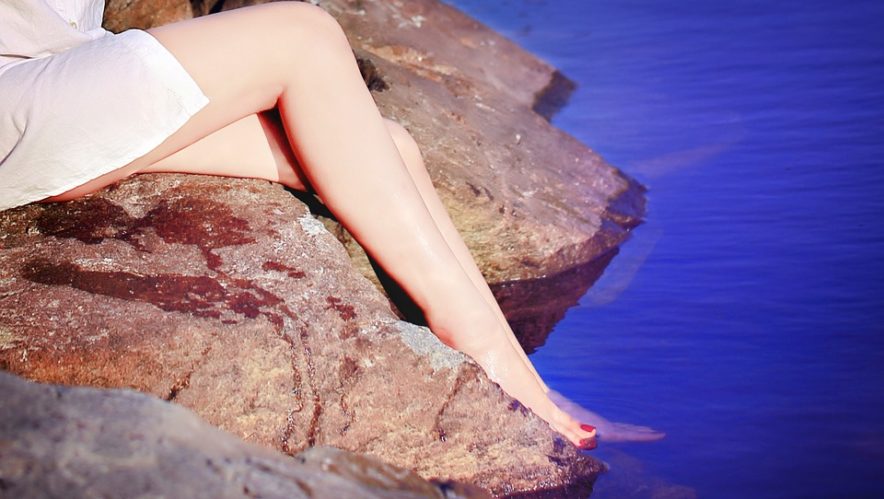 No cramp with varicose veins
Development, prevention and treatment

Varicose veins are permanently dilated, irregularly tortuous veins. They occur mainly on the legs, and sometimes in the pelvic area. Varicose veins are the most common of all venous diseases. Every second woman is affected by varicose veins, but only one in four men. Since this form of venous disease is frequently not only an aesthetic problem, but also cause severe afflictions which lead to a reduction in the quality of life of those affected, varicose veins should be treated by a qualified expert.

Although the predisposition to varicose veins plays a major role in their development, there are general measures which should be taken to prevent a stronger build-up or deterioration:

The veins transport the blood from the vessels back to the heart. This process involves a great deal of force in the veins in the legs, as they have to transport the blood against the force of gravity. Breathing as well as foot and leg muscles are used as natural pumps. The muscles compress the veins during movement so that the blood reaches the heart. Each vein also has dozens of venules which prevent the blood from flowing back into the vein. The venal lobes are thus used as valves. When these valves no longer function properly, the blood partially flows back again, and ultimately leads to excess pressure in the leg vein system.

The development of varicose veins is promoted by hereditary predisposition to venous weakness.

In addition, lack of exercise as well as being overweight can be the cause of varicose veins. Pregnancy can also facilitate the development, because of the hormonal changes and weight gain.

Oestrogen is often associated with venous pain. Therefore, caution should be exercised when taking hormone preparations (the pill). Sitting and standing activities are also unfavourable.

The smallest extended skin veins are spider veins, which glimmer blue or violet through the skin. These spider veins are not a disease in the medical sense, but for many people they are a significant cosmetic problem. Sclerotherapy treatment or laser therapy can improve the complexion,
Reticular varicose veins are somewhat more enlarged. In the actual varicose vein disease, the superficial veins are affected, which is called the strain varicose vein.

A secondary varicosis is referred to when there is clogging – known as thrombosis – of the deep vein. The thrombosis then causes a strong increase of pressure, making the blood flow against the current over the connecting veins and a backlog builds up into the superficial vein system. This results in the well-known image of the dilated varicose vein.

Firstly, a physical diagnosis is carried out for the diagnosis of varicose veins. As varicose veins usually occur on the legs, especially the lower legs, the expert will then look at the legs and scan them for abnormalities.

The most important instrumental diagnostic is the ultrasound examination with colour-ultrasound (colour coded duplex sonography). Resulting from this, superficial and deep veins, and especially the venous lobes, can be accurately assessed.

Although varicose veins will always remain sick vessels, aggravation of the veins can be countered with the right therapy and an abatement can be induced. Untreated varicose veins can lead to complications such as severe swelling in the leg, venous inflammation and open wounds (“open leg”).

As an accompanying measure to alleviate symptoms, specialists in all types of varicose veins recommend physical measures such as Kneipp treatments, cold lower leg affusions, or treading water. These make the dilated veins contract. A lot of walking, also barefoot, as well as vein gymnastics support the muscle pump function, allowing the blood to be transported back.

Vein remedies can have a slight decongestant effect and subjectively alleviate the symptoms. Vein remedies can’t and shouldn’t replace necessary compression therapy. Their administration may be useful for a limited period of time if compression therapy is not possible – for example, if you suffer from allergies or during very hot periods – and if a subjectively favourable effect is desired.

COMPRESSION THERAPY
Compression therapy uses compression stockings which specifically apply pressure to the veins. The damaged, dilated veins are compressed which supports the work of the muscle pumps and the venous valves. The most important mechanism is to improve blood flow to the heart by narrowing the diameter of both the superficial and deep veins. This effectively counteracts stasis in the leg. Compression stockings put the biggest pressure on the ankle, and for this reason should not be confused with support stockings, which distribute a significantly lower pressure evenly over the leg. Compression stockings are specifically adjusted to the length of the leg. There are different strengths or classes depending on the severity of the varicose condition. The stockings must be replaced after six months at the latest.

Various new therapeutic measure are available. Which method is the most appropriate in each individual’s case is decided by the examination results which are collected beforehand, in accordance with the wishes of the patient. The advantages and disadvantages of the treatment are weighed against each other.

SCLEROTHERAPY
By injecting a sclerosing agent in the vein an artificial venous inflammation is created so that the venous walls glue together from the inside. They then heal over time. For the treatment of small veins (spider veins, reticular varices) the debilitating agent is injected as a liquid, and in the case of larger veins (greater saphenous veins, side branches) as foam.
LASER THERAPY
Laser therapy coagulates the blood which is then directed to the vein wall, heats and closes. The method is suitable for the treatment of not so pronounced, relatively straight truncal veins. The operation usually takes place on an out-patient basis under local or regional anaesthesia. Through a small incision in the leg, a thin laser probe (diode laser) is inserted under ultrasonic testing into the affected varicose vein.
RADIO WAVE THERAPY
Radio waves are also able to close a truncal varicose from the inside by releasing heat. Via a puncture on the leg, a thin probe, which is heated by radio waves, is inserted under ultrasonic testing into the varicose vein. This procedure is also usually available on an out-patient basis under local anaesthesia. Both laser and radio wave therapy are mainly performed when the truncal vein is slightly varicose. In 90 to 95 per cent of cases the treated vessel is immediately eliminated. In these procedures, the affected vessel is not removed, but remains in place. Over the course of some weeks, however, it degrades so much that it is no longer seen on an ultrasound.
VARICOSE OPERATION
In contrast to sclerotherapy or laser therapy, varicose veins are completely removed during surgery. Operations are usually performed in the case of severe varicose veins in larger veins (truncal veins). Commonly practised varicose vein operations include vein stripping and phlebectomy.
Vein stripping involves pulling the varicose veins out of the leg by a probe inserted through a small cut in the groin. In a partial stripping, only the diseased part of the vessel is removed, the rest is preserved. A phlebectomy is used primarily for the removal of smaller branches of the larger vessels. Tiny cuts (1-2mm) are incised along the affected vessels. Using a small hook inserted into the subcutaneous fat tissue, the expert pulls out the diseased vein and removes it piece by piece. The cut is then closed with a fine suture, plaster strip or skin adhesive.

You can find out more about which cookies we are using or switch them off in settings.

This website uses cookies so that we can provide you with the best user experience possible. Cookie information is stored in your browser and performs functions such as recognising you when you return to our website and helping our team to understand which sections of the website you find most interesting and useful.

Strictly Necessary Cookie should be enabled at all times so that we can save your preferences for cookie settings.

If you disable this cookie, we will not be able to save your preferences. This means that every time you visit this website you will need to enable or disable cookies again.